After extended testing and driving periods with the new battery system installed in their vehicles, the golf cart, and other low-speed electric drivers gave glowing reports that included overall enhanced performance, doubling of the expected standard range and exceptional customer service from the company. The satisfied customers have expressed continuing satisfaction with Lithium Boost’s inventive power solution and now actively recommend it heartily to other LSEV drivers.

Joe Waddell of Florida installed a Lithium Boost 72V system into his GEM e2 in cooperation with his GEM dealer. The 30 miles of travel distance provided by a single charge of the GEM gel batteries wasn’t sufficient for Waddell’s needs. The new Lithium Boost system provided more than double the distance; it also reduced charging times by more than half. Waddell claims that his vehicle’s charging time for a 38-mile distance is now about four hours or less compared to eight-hour charge time for 25 miles using the GEM batteries. Also, the high Florida temperatures do not seem to have any measurable impact on either charging times or distance. The Lithium Boost system was installed in January of 2016. Waddell states that John Wade from Lithium Boost Technologies provided exemplary customer support throughout the process. He is very satisfied with his new system’s performance.

Mike Pelle, who is also from Florida, installed the 48V Lithium Boost System into his 2006 GEM about a year ago to replace the standard batteries. A longtime GEM customer, Pelle has had mixed feelings about his relationship with his low-speed vehicle. He loves how it handles on the road, and he notes that the safety factors can’t be beaten. However, having enough battery life to get home was always a concern. With the new Lithium Boost System, Pelle recharges his cart once every week instead of nightly. He claims that he has driven up to 40 miles in a single day without stopping to recharge. The 10-year-old cart drives even better than when it was new, and the extended battery life has changed how Pelle uses and views his vehicle. Like Waddell, Pelle applauds the customer service and positive response he has received from Lithium Boost. He highly recommends the Lithium Boost brand and their battery replacement system to all of his fellow GEM owners.

Polaris hunting vehicle owner Chester Williams from Texas is another consumer who wasn’t getting the mileage range he required. He installed the Lithium Boost System two years ago after becoming concerned about getting stranded without a power backup and the fact that acid corrosion from lead batteries could be seriously damaging his vehicle. Williams installed two sets of Lithium Boost 48V, 200ah systems into his cart to provide extra coverage for his long-range driving needs. Depending on the quality of the terrain and the weight of any load he is carrying, he can now get up to 100 miles on a single charge, and he also enjoys faster-charging cycles. After a long hunting trip, the Lithium Boost system allows Williams to drive about 50 miles before quickly switching to his second battery system to cover the remainder of his trip home.

Lithium Boost’s CEO, Sam Lev, states that the company is happy to have the more than 700 early adopters who understand the value of the advances in lithium-ion science and can enjoy the many benefits it has provided despite inevitable new product introduction challenges. Lev claims that his company’s core competency is their patented BMS and smart charger system that is designed to continually optimize and monitor charging and discharging to maximize stored energy and ensure a long life for the battery’s lithium cells. After seeing an increasing market demand for the company’s innovative solution, their system has now been proven successful in the field and is almost certainly positioned for the long run.

Lithium Boost Technologies Inc. is a privately held company based in San Diego, CA. It provides advanced systems to balance and monitor Lithium-ion batteries used in low-speed, electric-powered vehicles. Using proprietary technology, Lithium Boost has created an advanced performance system that utilizes Smart Battery Management System and cutting-edge chargers that can best harness the potential power of lithium-ion prismatic cells. Lithium Boost was founded in 2011 to oversee the development of green energy alternatives for existing lead acid batteries in Neighborhood Electric Vehicles (NEVs), golf cars, off-road or hunting electric models and other low-speed vehicles. In doing so, they have made maintenance more convenient and provided improved performance and a longer life cycle at a competitive price. 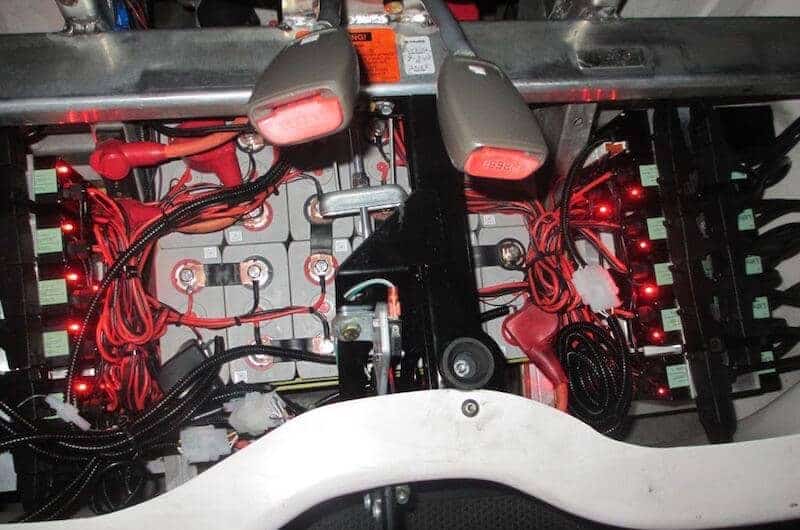 This entry was posted in Golf Cart Batteries.