With a green light from the City of Gold Coast, earthwork has begun on the new golf cart track connecting Hope Island and Sanctuary Cove.

The track has been specifically designed for use by golf buggies, low-speed vehicles (LSVs) and neighbourhood electric vehicles (NEVs), none of which can be legally driven on existing roads between the two resorts.

Although the idea for a golf-cart track had been conceived years earlier, the Gold Coast City Council approved funding for its construction last November. Shortly thereafter, the bodies corporate of Hope Island notified residents, and final plans were completed by the end of the month. At that time, it was estimated that it would take four to six weeks to procure materials and hire contractors.

Once the planning was finished, the city council began work on a new ordinance that allows golf carts, LSVs and NEVs registered with the Hope Island or Sanctuary Cove resorts to be driven on the new track.

In conjunction with the construction of the new track, the Hope Island bodies corporate began plans for golf buggies to safely exit and enter the new track at the commercial centre known as the Boardwalk. Plans have also been developed for additional golf cart parking at the shops and restaurants of the Boardwalk.

Construction of the golf-cart track began right on schedule, but not all residents were happy about it. Seventeen paperbark trees had to be removed from the path on January 5 to make way for the new pavement. The city council, however, defended the decision, assuring those who live nearby that the loss of trees will be minimized. 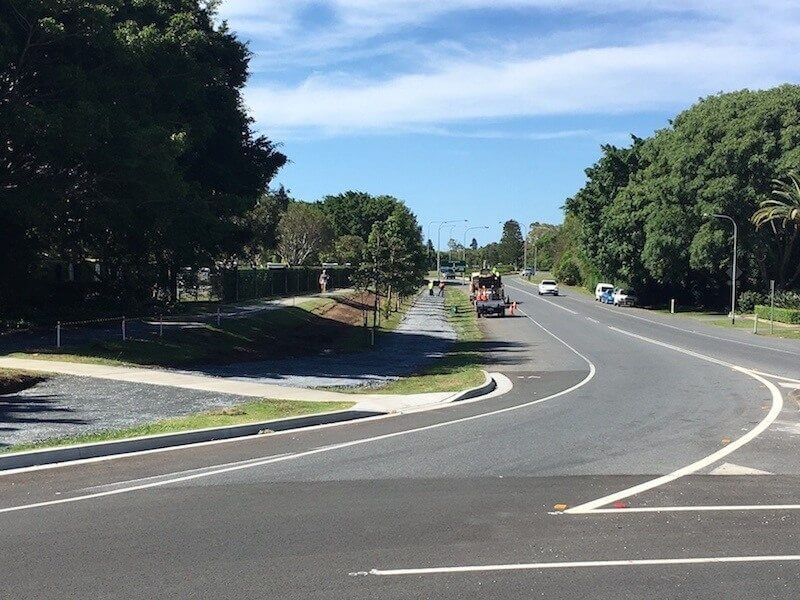 “This is an important and innovative transport connection that will link Hope Island and Sanctuary Cove. Residents of Hope Island and Sanctuary Cove have been waiting 10 years for this infrastructure, and I am pleased to be able to deliver it,” said Cameron Caldwell, chair of the Gold Coast city planning committee. “Council has been mindful in the design to ensure safety, minimizing the loss of trees as our priority.”

The first earthwork began along the western side of Santa Barbara Road just north of the Hope Island Shopping Centre. The track will then extend from the roundabout on Rialto Quay Drive to the entrance of Sanctuary Cove, running parallel to Rosebank Way.

Although some residents are displeased with the removal of trees, others are delighted that they will be able to travel from Hope Island to Sanctuary Cove and vice versa without the need to use traditional gasoline-powered vehicles. One of the reasons for building the track in the first place is to encourage residents to use electric vehicles, which are more environmentally friendly.

Both Hope Island and Sanctuary Cove have unique attractions and opportunities for shopping, dining and recreation. For instance, Sanctuary Cove hosts two championship golf courses, the Palms and the Pines, and the annual International Boat Show while the Links at Hope Island hosts the Qantas Legends Golf Classic and the Johnnie Walker Classic. View our range of golf carts for sale here.

This entry was posted in Golf Carts.